After two days I feel like I’ve been here a week already. I’ve gotten so much in. Yesterday was spent in Hama, a city known for it’s “Norias” or Water Wheels. There are about 17 left in working order here in the city. The day was spent walking along the river looking for and at water wheels. Because it’s the dry season there were only two wheels in operation (see video below). And I gotta tell ya, it was cool! I just couldn’t get enough of these things! Although I must say I don’t think I pulled off a great shot.

In between visiting the wheels there was a stop at the Museum, where the security guard escorted us from room to room, why? because we were the only ones there and he had to turn on the lights before we walked into the room to warm them up first. There was also a stop at the Roman Catholic Cathedral. The largest church in Hama, although not particularly impressive. After arriving there it was clear that it was not open to the public outside of service hours. Just as we gave up and began to leave, a woman in a black dress (no head covering) walked up to us from the side of the church offering us some bread. She insisted that my partner and I each broke off a piece from her large flat round loaf of bread! Then she gestured to the side of the building. So we went; a group of women were standing next to what seemed like a small chapel and what seemed like the end of a service. They gestured for us to enter. It was nice enough, although catholic, ti seemed very much like a Greek Orthodox church. While inside, another woman approached us and again offered us bread. I must say there really is no gesture in the world more welcoming than food!

At the end of today, our driver also offered to take us to his house for some tea, which was followed by a modest (very modest) meal, which was actually vegetarian. Although it is supposed to be a pretty common gesture in these parts, I am very clear that it was a business dinner where he made a pitch to be our driver for the next week. It was very interesting, as at a certain point I was taken into a seperate room, where I was introduced to his sister in-law (who shook my hand and kissed me, and kissed me and kissed me) and then his wife (who did less of the same). After a little bit of discussion, none of which I understood, his wife clearly kicked him out of the room. It was now time for the women to talk and to get to know each other.

So what did I learn? I will likely loose my husband unless I conceive a child soon. It’s clearly a problem for me as a woman if I don’t have kids soon. The women children only get enough education to read, write and count. The boys actually get enough education to learn some english (their 12 year old son translated a little for me). Saying “I don’t understand” in English gets me no where. It is universally understood that when people don’t understand you, all you have to do is speak louder (which is what they did!).

So I’ve decided, for the rest of this trip? I have 3 kids, their names are Amber, Corbin and Mira. They are 7, 9 an 12 respectively. They are at home with their nanny.

And as for the rest of day two? I went to the best preserved and one of the largest crusader castle in the world. Although impressive, it was pretty much just a fortress. Saw the castle of the assasins and St. George’s cathedral too. Overall, just so so, but I must say I’m having a great time. The people here seem genuinely friendly. They seem to want to share their lives with foreigners. They seem curious about where I’m from and they extend that middle eastern “welcome”. And after two days it feels like people are staring less, perhaps, it’s because I’m not staring at them? or is it that I feel a little bit more secure about being here and owning my own space? I’m really not sure. I’m also starting to feel more comfortable about wearing my head scarf. That is I feel like I know what I’m doing, rather than the idea of wearing one (let’s not get carried away now).It should be noted that it is not mandatory to wear one. About 10% of the population here is Christian (very much so).

**unfortunately no pictures or video can be uploaded at this time due to some internet issues here. 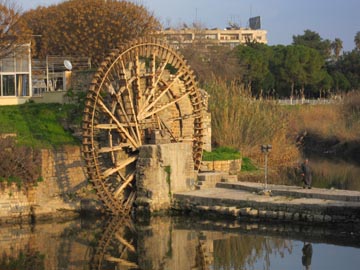 yes folks this is a place that sells camel meat: 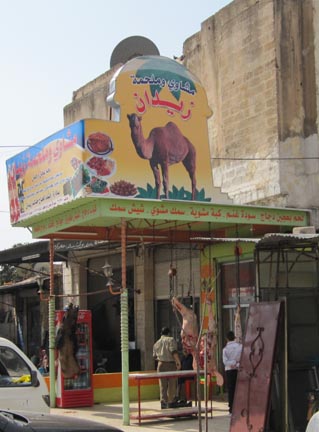