From Aswan headed further south to Abu Simbel, so what’s there to see here? welllllll, there’s  Abu Simbel of course! Ok, the the Ramses Temple (see below).  It feels like everywhere in the world some lonely ancient dude gets himself stuck in the middle of nowhere and decides to  build monument to a God or just has one huge need to “erect” something big dedicated to himself because he was so clearly bored out his mind (and let’s face it, it’s always a dude!). And on just about every trip I’ve taken for the past past 5 years or so I’ve ended up at these places. They are what I call one trick ponies. Always in remote areas with nothing else to offer, and always attached is one little village/city/town with nothing else going for it; filled with poor people who can’t make a living doing anything but supply the “tourist” industry or lack there of with stuff us tourists don’t want or need.

And Abu Simbel? Is one of those towns. On the southern most part of Egypt bordering  Sudan there is nothing to do or see but the monuments of Abu Simbel. I’m glad I made it here and I’m glad I saw this… it is spectacular. The ancient and modern history of these two temples makes it worth the trip. You see where it sits now is about 100 ft. higher off the valley floor than where it sat originally. Why were these moved? When they decided to build the Aswan Dam and flood valley they knew that they were going to submerge these two temples (and about 10 others) but this was the largest, and compared with the many other temples I have seen on this trip, it is amazingly well preserved. The fate of the others I am not sure, they did move the large temple of Philae and Dendur (now at the Met in NYC). 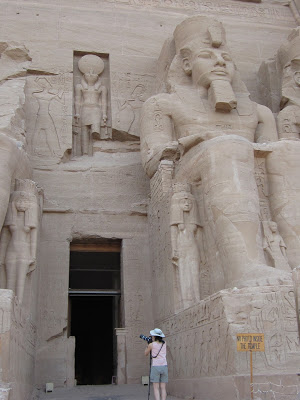