My stay in Egypt has come to a close.  I’m at the airport and headed to Istanbul (I’m really looking forward to that).  Until I started my preparations for this trip I had very little interest in coming here. After all, how interesting could a few pyramids in the desert be? In the end, the Pyramids really weren’t that interesting for me. You couldn’t climb them and couldn’t blink without someone asking you for more money for… whatever.

But the sites beyond the Pyramids proved to be quite interesting. All of the temples in and near Luxor were indeed spectacular. I found the food to be more than a one song note (see Mickey D’s post – ha!).  Cairo, in the end was not as sleepy as I originally thought. Depending on the day of the week it can be a lively upbeat city with a nightlife, people out and about enjoying themselves. Overall I thought the country was way less conservative than I imagined. I thought I would have seen more people praying during prayer time than I did; for the most part unless I was at a mosque during prayers I only observed a few on the street praying – this was a surprise.

It is a much poorer country than I had imagined too. And perhaps this leads to my complaint about Egypt. The reason why most foreigners come here is to visit the ancient sites. At the sites are vendors of all sorts (nothing unusual there), they are aggressive and annoying (not unusual either). What is unusual is with certain tourists they seemed particularly obnoxious (for the most part they left me alone, must be my evil eye) which made for an unpleasant experience. What was also particularly annoying and really did sour my experience here was something called “Baksheesh” also known as a tip (perhaps bribe would be a better description). At every turn in the tourist area people (men) would openly ask for Baksheesh, to simply do their job, not do their job, to do something beyond their job or simply because they were standing there. The guy who took your ticket asked for baksheesh, the security guard would offer to let you touch the relics and then put his hand out AFTER. He would offer to take you into a “gated, off limits area” and then ask you for baksheesh. There would be several men standing in front of the bathroom doing nothing demanding baksheesh before and after you used the facilities (at monument sites) for using their facilities.

I am left wondering what is it in this culture that leads to this attitude/behavior? The only answer can be poverty and several millennia of struggle between the haves and have nots. I did find that once well outside the tourist areas however, that this attitude did begin to melt away and  the people were friendlier. 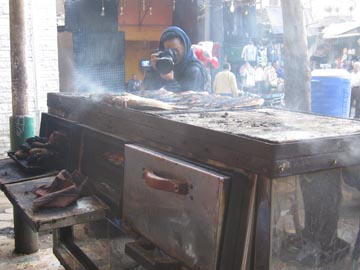 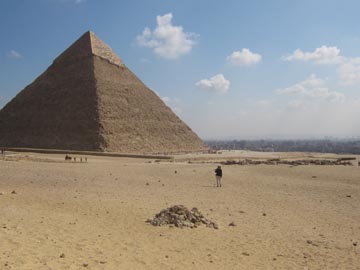 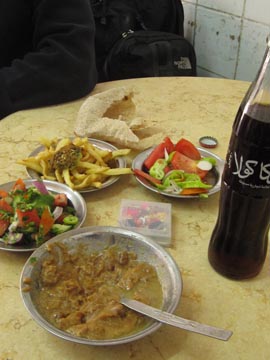 Breakfast of champions! Foul is beans served with oil, salt, tahini sauce with a side of tomatoes, onions, peppers, cucumbers and bread. I think they added the fries to bring up my bill a bit.  ;) I added the soda and tabouli salad. The total was about $1.30 . This is the most popular breakfast in the region – and you can get it everywhere.