Bitching and complaining in Chile

Ok folks, now the bitching and moaning portion of the trip. So yesterday, got up early again (6 am) with the intention of driving about 1.5 hours to the trail head of the most popular hike in the mountain to get a view of “Torres” this is the most distinctive feature of the park. With the early call it meant getting on the trail at about 8 a.m. and hopefully getting in front of the rest of the other crazies. But on the way the sun began to rise, and oh did it! Orange and gold unlike the day before when everything was blah due to cloud cover, so little me had to stop and shoot. Afraid that I would miss the shot it would seem that I stopped a little too soon and did not get to the perfect spot anyway! ARRRGHH. 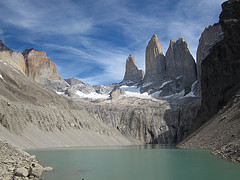 Ok, got to the trail head, it’s now 9:30, bus loads are unloading onto the trail head. And although the forecast was for good weather I was still thinking about the weather from the day before which was a little bit cold and unbelievably windy. And I suddenly realize about 10 minutes in that I’m over packed and over dressed for this 9 hour hike. So back to the car to drop everything off. Now it’s 10. And it would seem I was just about the last person on the trail for the day and in the heat of the day – yes the weather took a 180 degree turn from the previous day. (I will admit it wasn’t all that bad). The hike was grueling it was a long distance with a lot of ups and downs, and because i got out on the trail so late, overnight hikers had already started their decent. What does it matter? Well in stead of just enjoying the great out of doors it was HOLA! every 10 minutes or so as hiker after hiker passed. Cause this is Chile and they are friendly that way. Then once all of the over nighters passed by, those who got out in front of me were now returning! I am so tired of saying HOLA to say the least! Really, it’s tiring after a while. But in the end it was rather worth it (see photo below). I was trully exhausted, so I had dinner at the hotel restaurant, instead of cooking myself. All I have to say was I should have cooked it myself – pasta and canned sauce would have been better than that meal. I think prison food is likely to be better than that; and to add insult to injury? it was expensive . Then again everything here is. Although my expectations were pretty low, that meal was worse than i could have imagined.

This morning thought I should get up for the sunrise again and now I know exactly where I need to be, so again up at 6 a.m. Things are honky dory, except that I am exhausted. Oh did I mention thatI have not slept well in 2 nights, because I have been so giddy about what I’ve been experiencing and seeing here at Torres Del Paine I can’t seem to shut down? As I put on the last of my clothes I open the door to double check the weather and guess what? Rain. Great that means no sunrise. Go back and rethink the clothes strategy. After that I decided to go out and hope for the best. There was no going back to bed at that point.

So I did do some shooting but I can’t say there’s much to show for it. For today’s hike I had to take a 30 minute boat ride to the trail head. That was all fine and good. The staff was very nice, they even helped my fix my tripod head, which required an allen wrench. But then there was this big bus load of tourist who got on the boat and who decided to use the upper deck as their own personal group stretching area. And then on my way off of the boat, idiot (that would be me) forgot said tripod head and monopod which was attached on the boat (good bye equipment).

Got to the trail, took a restroom break which lead to the other group getting on the trail first uggg. After about 40 minutes I finally caught up with them which felt good, and figured that they would have to stop for a lot of breaks and this may allow me to be in front, take shorter breaks and get my shots without dealing with people. As I was actually feeling good I was moving at a ridiculously fast pace… for 2 hours. It felt like I was working out really hard for TWO HOURS! and it was all I could do to stay in front of that group. And in the end I took only a couple of short 2 minute breaks, but for some reason they kept on catching back up. In the end they never did pass me but they literally showed up at the major resting point like 100 yards behind! Like what the hell? they were all old people too! I know I’m not in the best of shape but what the hell??

Ok, forward for another hour before turning around. About 30 minutes into the return, that group catches up and several their members pass. Here’s the thing, have you ever driven on a two lane highway and get stuck behind a slow car and you want to pass but it means that you have to get into the oncoming lane side? So you move over, and then back and over and then back again but you just can’t do it and you’re really stressed out? And then the guy 4 cars back comes cruising by you AND the guy in front of you? So these folks pass because I’m trying to get a shot and I start again just about 25 yards behind them (the rest of their group seems to have fallen off the face of the earth), and I decide I need to pick up the pace because they are an organized tour group which clearly wants to catch the last boat back like me, and they probably have things timed right. So if they all pass me I will know that I’m going to be sleep outside tonight. So I pick up the pace, and I’m huffing and puffing and I’m trying desperately to get to these folks but I just can’t do it, no matter what I just can’t catch them, but I can see that they are moving at a very very relaxed pace. WHAT THE HELL? The one guy is like 40 lbs over weight too!! And he’s just strutting along. I don’t get it!

In the end I never did catch them but my timing was just fine and I caught the boat. Unfortunately the nice boat staff did not find my monopod and no one turned it into the the folks at the boat launch either. OMG!

Tonight I get in to my nice hot shower only to discover why my feet hurt so much. I have a blister on the ball of my left foot and a blister under my toe nails (one on each foot)…JOY! I went to lance the visible blister and think to myself, no problem I have a surgical knife in my first aide kit. What? I’ve forgotten the kit for the first time in 10 years? really?

One more short hike tomorrow before heading back to Puntas Arenas. But will my feet be okay? Will I sleep tonight? Should I get up for the sunrise again tomorrow?