Today, I got up around 6 and out the door at 7 for the sunrise. Hiked up the tallest volcano on the island (500 meters – a total cinch compared to what I was doing this time last week in Patagonia, what a difference some experience makes!). Unfortunately there was no sunrise as there was cloud cover but it still made for some interesting images. From there you can see the entire island, and I was reminded again that I am definitely in the most remote place on the planet. When I visit a place like this I always wonder what it was like to live there during the time they built these structures. Although, as stated in the previous post, this island does not come off as a barren wasteland there is not much here and there isn’t much of a shore line. The coast is mostly cliffs against crashing ocean waves . What I’m getting at is that there wasn’t much to do here. Maybe some fishing, a little bit, like a little bit of farming and then there are the big heads. Although NOTHING has been proven about why these structures were built I think the answer is simple – BOREDOM! What else do you do with your time in a place like this? It’s been proven that due to the lack of resources (food and water) people tend not to procreate much (ie. have sex) so what would one do to fill that void? hmmmmmm lemme count the ways… oh, how about carving big stone heads out of really hard stone, with few tools, that way 50 TONS and then moving them several miles from the original location with little wood to do it with?

BTW, they natives didn’t seem to build big houses, as they did not have many resources to do it with. they are low structures akin to a cave but that seems to be it.

Although Rapa Nui’s ancient past is very murky, it’s recent past (about 300 years worth) is much more clear. After first contact with the Europeans things went down hill, from the disease they introduced to being kidnapped into slavery, to imprisonment on their own island and used as force labor (ie slaves) for various commercial exploits (ie. ranching). At one point the population of Rapa Nui was down to about 100 people. Today, the community survives on the tourism industry and subsidies from it’s mother country – Chile. It feels like the natives are still not the ones who benefit most from their own land and their own culture. I think I will stop my ranting there. (see “Statues That Walked”)

As for my visit, during my 12 hour hike up and then down the volcano today, I did get a chance to see the lesser known Moai. Although interesting I will look forward to seeing the largest ones tomorrow. It’s been a pretty long day.

West side of the island 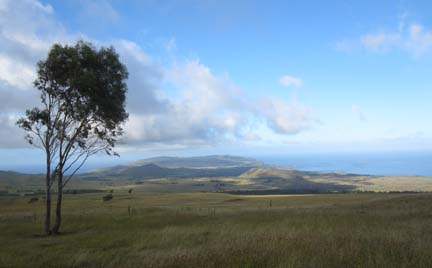 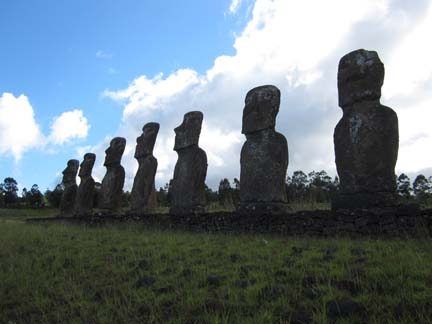 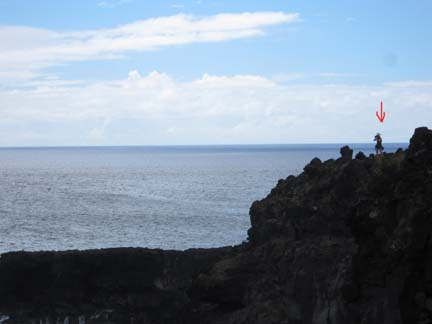