So I can write about the pictures I was not allowed to take today of the Florence Nightingale Museum or the adventure I had entering the museum because it is on an active military base that is heavily fortified or I can write about the several mosques I visited today that were either closed for repair or where photos were not allowed or I can talk about being in the market place (see footage below).

But alas I want to write about my experience here in Turkey and Barack Obama. Yes Obama! Prior to the election everyone would ask if I was going to vote for Obama once they found out that I am an American. The question was usually posed like this “Bush or Obama?”. Not “McCain or Obama” but BUSH! Crazy. Now that the election is over they all just say “Obama number one” or “Obama very good!” etc. Last night at the airport returning to Istanbul from the Kayseri airport even the airport security guys had to mention Obama when they saw my US Passport! Tonight while in the market place here in Istanbul the vendor said “You vote for Obama?” I asked him, “Do you like Obama?” he showed me this under his sweater! 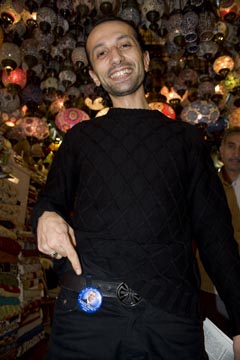