Well Buenos Aires is not what I was expecting that’s for sure.

I spent a second day walking around and seeing both the major and minor sites of the city. I mostly got rained (again).I am finding that Buenos Aires, much like Turkey, is a very pleasant surprise. The city is very clean, the beggers and hawkers were far and few between (even fewer here than in Turkey), mostly everyone is friendly and it’s all very modern. It feels a lot like the city of Marseille in southern France or even Montreal, Canada. The streets and buildings here are very reminiscent of Europe, just a little more modern. I’m also surprised by the lack of street food. Thus far I have only seen candied peanuts and hotdogs. It has also been surprising that many restaurants seem to be non smoking; and although they do smoke here it’s not as popular as I would have assumed.

The other surprising aspect life here is the Italian influence. Apparently 30% of all Argentinians can trace their ancestry to Italy and hence the pasta! They do love pasta here. They also speak spanish with an italian accent, and of course they don’t say Adios here, they say Ciao!

In my usual fashion of speed tourism I feel that I have already seen just about everything note worthy and have started in on the “less” noteworthy. Only to find that thus far the less noteworthy is more interesting.

And the photos of the day are pets. The first is a cat who doesn’t seem to want his picture taken. And the other  was taken when I passed a pet shop. Two women were standing at their window giggling so I stopped. There was a fellow in the window holding an animal that looked a lot like a monkey. So I stopped. The critter was being held up on his hind legs and seemed to have a skinny body with a big head. If you look closely it is a furry cat that just got a nice close hair cut! 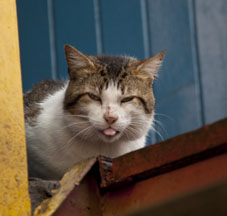 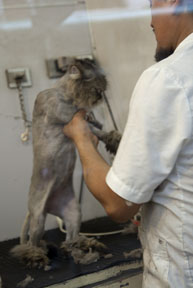