I have been shooting for over 25 years, (i’m 30 ya know), and it was not until a couple of years ago did I bother to carry a tripod with me on a regular basis (and with that it’s only a mini table top model). I am a firm believer in hand holding my camera. I find that tripods and the alike just weigh down your bag with one more thing. That’s my 2 cents. But this post is about tripods so here it is.

When to use a tripod? There really is only 2 reasons to be using a tripod. 1. If you are shooting products in studio and need to do a lot of light adjustments. 2. You are shooting in low light alot (ie. night time photography or in side buildings)

How should you choose tripod legs? In the world of professional photography often tripods legs are sold separately from the head so let’s talk legs. They come in 2 flavors, the type with leg locks which twist or have flip levers. IMHO unless you are buying a Gitzo you should always buy legs with flip levers. With the exception of ones made by Gitzo, twist locks seem to go bad very quickly – and this is why Gitzo legs start at $350 new. With flip levers you can always readjust the nuts and bolts to ensure a tight lock. Aside from the levers, it just comes down to size. I think that the legs should be able to handle about twice as much weight as you anticipate having to put on them. It is preferable that it has the ability to extend taller than yourself; because let’s face it, often when you need a tripod it’s so that you can stabilize your camera into a position you can’t easily hand hold, and often that’s over your head. It is preferable that it is as light as possible especially if you plan on traveling with it. And if you are, make sure there is an easy way to attach a shoulder strap or to connect it to your bag.

What about the head? So what kind of tripod head should you buy? to go with your legs? Many many people like ball heads, because they seem so flexible and like it’s the right thing to do; you can twist it every which way and then just lock it in right? Wrong, if you are serious about using a tripod I would advise you get a “pan tilt” head; the reason for this is if you only need to make an adjustment in one direction, such as forward and back then you only release that mechanism. In the instance of a ball head, when you release the ball you are now moving in all directions, making small changes difficult. You actually get more control over your movements with a pan tilt head, albeit slower. Having said this, I do own a Manfrotto 484RC2 ballhead for my mini tripod; why? because it’s small and compact. I have regular pan tilt heads for my regular tripods. What about quick release?? I love quick release. It means that I can quickly dismount my camera from my tripod so that I can move the tripod easily without worrying about my camera. But if you are shooting in a studio, it really doesn’t matter as you will not be moving your equipment around all that much. Once you decide on the mechanics of the head which one to buy will again depend on how much weight you plan on putting on it.

What about a table top tripod or those new fangled Gorilla Pods? OK, this is an OPINION, and I am entitled to it. First the little Gorillapods by Joby are great! If all you are attaching is a point and shoot to these things work GREAT! I love them. So I bought the SLR version for my DSLR camera, and guess what? it sucks. It’s big and it would not hold, even the one they sent to replace it with did not work well; and my equipment was far lighter than it’s stated load capacity. My friend the engineer said, “Zim, this design never works well, under real world conditions. And if they did they don’t last very long. It’s a great idea that no one has been able to execute well.” If you need a small tripod I would suggest one of these: 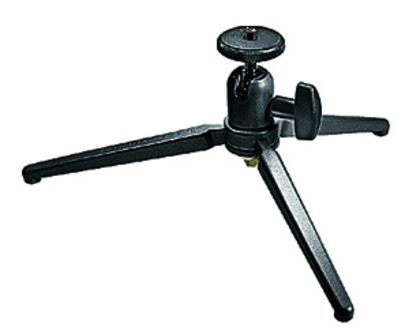 Or I saw this on line recently but it’s $120, BUT it has a load capacity of 55 lbs!!! And the legs come out so it’s very transportable and small! It’s made by Novoflex.

Here is rule of thumb, if the tripod looks flimsy? IT IS! Good tripods don’t go bad and you can buy them on ebay used cheaper than retail and without worry. The cream of the crop tripods are made by Gitzo, which was bought by Bogen, which is now owned by Manfrotto – but a tripod sold under the Manfrotto name is still not a Gitzo; make sure it says gitzo if that’s what you want! And a 50 year old Gitzo? it’s still worth more than a new one.